We DNA test all our Golden Retrievers for ICT, PRA1, PRA2 and MD. This is to insure your puppy will never be affected with these diseases. An affected can be bred to a clear which will produce only carriers. Carrier cannot be bred to a carrier. This will produce half carrier and half affected. We are very careful what lines we breed so we don't ever produce affecteds.

PRA1 and PRA 2: A research team at the Animal Health Trust in the UK and the Swedish University in Uppsala have recently identified a mutation, GR_PRA1, that causes Progressive Retinal Atrophy (PRA) in the golden retriever. OptiGen had previously identified another form of PRA caused by the prcd mutation in this breed. With the aid of the new GR_PRA1 DNA test, the cause of the majority of PRA cases in the golden retriever can now be explained. Unfortunately, there are still a few cases of PRA in the golden retriever that are not caused by either of the known mutations. These cases will continue to be a subject of ongoing PRA research. If you know of any PRA-affected golden retrievers, please encourage the owners to contact OptiGen to learn about our Free PRA Testing/Research program : (http://www.optigen.com/opt9_research.html)

Current statistics on the incidence of GR_PRA1 indicate that the disease is primarily of concern in European lines of golden retriever however we have confirmed that GR_PRA1 is the cause of some of the PRA-affected in golden retrievers that have been sent to OptiGen for research from Canada and the USA. OptiGen will be happy to provide the Golden Retriever Club health committees with regular updates of the statistics on the incidence of PRA, both prcd and GR_PRA1, as more dogs are tested.
Similar but completely unrelated to prcd, GR_PRA1 is inherited in an autosomal recessive manner. This means that GR_PRA1 disease will occur only if two copies of the mutation are present; carriers of one copy of the mutation do not show disease. By ensuring that at least one parent is Normal/Clear of GR_PRA1 then no GR_PRA1 affected offspring will be produced in a mating. See the chart below for expected breeding outcomes when the GR_PRA1 status (Genotype) has been determined by DNA testing.

Following their success in identifying the GR_PRA1 mutation in 2011, the research team at the Animal Health Trust (AHT) in the UK and the Swedish University in Uppsala subsequently identified a mutation, GR_PRA2, that also causes Progressive Retinal Atrophy (PRA) in the golden retriever. OptiGen is pleased to license the test from AHT for the pending patent's use in North and South America.

GR_PRA1 and 2, in combination with the OptiGen prcd-PRA test, enables us to identify nearly all causes of PRA in the breed. Unfortunately, there are still a few cases of PRA in the golden retriever that are caused by as-yet unidentified mutations. These cases will continue to be subject of ongoing PRA research. if you know of any PRA-affected golden retrievers, please encourage the owners to contact OptiGen to learn about our free PRA testing/research program: (http://www.optigen.com/opt9_research.html)

As of July, 2013, frequency of the three known forms of PRA in the breed are as follows:

All three mutations are inherited in an autosomal recessive manner. This means that disease will occur only if two copies of the same mutation are present; carriers of one copy of the mutations do not show disease. Similar to planning matings with prcd-PRA and GR_PRA1 in mind, by ensuring that at least one parent is Normal/Clear for GR_PRA2, no GR_PRA2 offspring will be produced.

Ichthyosis: Whose name is derived from the Greek word for "fish" due to the fish-like scales that are observed on dogs with the disease, is a common inherited dermatosis observed in the Golden Retrievers of Europe and the United States. Dogs with Ichthyosis develop white scales on the skin soon after birth. The scales persist through the animal's life and progressively blacken, becoming dry and rough with age but typically do not cause itching. Secondary infectious complications (bacterial, fungal or parasitic) are occasionally associated with the condition.

The Ichthyosis research that led to the mutation's discovery and the DNA test's validation was conducted by a canine genetic team from CNRS-University of Rennes (Dr. Catherine André), Dr. Eric Guaguère (Clinique Vétérinaire Saint-Bernard, 59160 Lomme, France) as well as their partners at ANTAGENE laboratory. Antagene owns the international license for testing Ichthyosis (patent pending).

Symptoms appear relatively quickly, at about six weeks to two months of age. An affected dog will exhibit muscle weakness, difficulty standing or walking normally, and difficulty swallowing, Symptoms can range from relatively mild to severe, but GRMD is generally fatal at about 6 months of age.

The GRMD mutation is sex-linked and located on the X chromosome. So while both male and female dogs can be affected, GRMD is mostly a disease related to male Goldens. Females can be carriers of the mutation, however, and will not exhibit any symptoms. DNA testing to identify both male and female carriers is important to remove them from the breeding population. 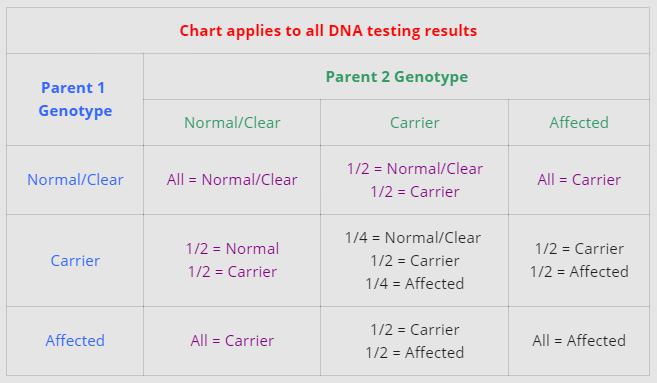 THIS CHART SHOWS THE DNA RESULTS